By positivelyrollingSeptember 12, 2014In The News 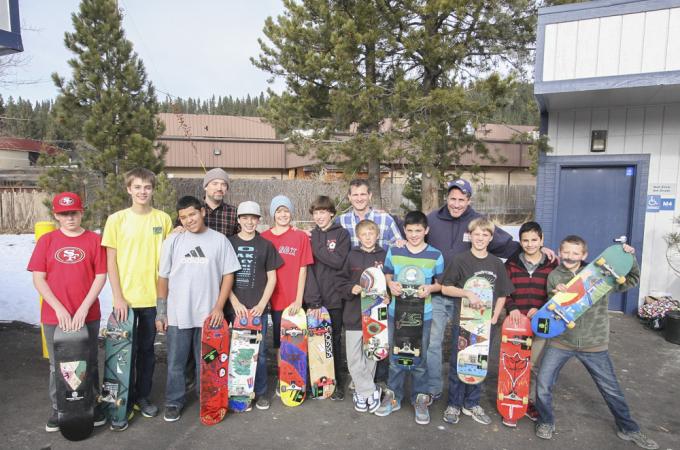 After Truckee High School lost three male students and two alumni to suicide in the span of three years, Vicki Isakowitz wanted to do something to prevent it from happening again. As the owner of Clever Minds Learning Center in Truckee, Isakowitz was particularly affected by the tragedies since one of the boys had been a student of hers. Inspired by discussions at the Youth Suicide Prevention Task Force meetings, she surveyed the area for positive youth development programs for boys that would teach them self-confidence and life skills, but came up short, only finding programs for girls like Girls on the Run. So last summer Isakowitz reached out to other members of the community to create a new program. The end result is Positively Rolling, an elective program for middle school boys that focuses on leadership through creativity by combining mentoring, an open environment for discussion, and skateboard art.

“The numbers were dwindling at the Youth Suicide Prevention Task Force meetings,” Isakowitz said. “It was important to keep the momentum going.”

“What can we do before kids get to high school to give them tools to equip them to better handle situations?” Andy Reichwald asked. “Adolescence is a difficult time.”

What the group came up with was Positively Rolling, a five-week program with a different “substance of character” topic discussed each week: community, integrity, dealing with success versus failure, respect, and growing to be your own man. Instructors introduce the topics and the students then share their thoughts and experiences and ask questions. Afterwards, the boys convey what the topic means to them by painting their interpretation of it on a skateboard deck they get to keep. Reichwald calls it “their personal code of arms.”

Positively Rolling was introduced at SELS as a pilot program last fall.

“We are using creative expression to process thoughts, emotions, and experience,” said Randal Hutchinson, an avid skateboarder, artist, and a Positively Rolling instructor. “One of the goals is to start talking about topics not covered in schools — real life stuff.”

Another goal of the program, said Isakowitz, is to increase confidence among boys during an impressionable age and to teach them that it is okay to ask for help.

“Girls are more open to talking about their feelings and sharing; they wear their hearts on their sleeves,” she said. “It’s hard for males in general to ask for help. We want to teach them at a young age to ask for help and that no one will dismiss you because of it.”

All of the sixth, seventh, and eighth grade boys at SELS — totaling approximately 60 kids — participated in the program last year, with about 10 kids per session. Reichwald, who has a 13-year-old son at SELS, co-taught the classes with Hutchinson. He said it was important to give young men perspective on failure.

“When you’re 12, you don’t know that it’s okay to fail. It’s important to learn those lessons — if you fail you can pick yourself back up and succeed in the future,” he said. “It’s not a failure unless you don’t learn from it.”

As part of SELS’ end-of-the-year Celebration of Learning, photos of each boy and his personalized skateboard were displayed in the school.
“It was really inspirational to see how the different kids responded,” Hutchinson said. “A lot were brought up with sports and hadn’t had the chance to do art.”

Alison Schwedner, director of the Community Collaborative, a program of the Tahoe Truckee Community Foundation, was part of the Youth Suicide Prevention Task Force steering committee. She thinks that Positively Rolling is a step in the right direction.

“One of the themes of the conversations [at the task force] has been how to create additional opportunities for youth to have deeper connections and relationships in their communities,” she wrote in an email to Moonshine Ink. “Positively Rolling connects young boys with positive male role models, creates space to have meaningful and intentional conversations with boys, all while doing a cool, fun activity.”

Positively Rolling has since been adopted by SELS as one of its programs, and will expand to Forest Charter School (which did one session last year) and Alder Creek Middle School this year. Isakowitz hopes to eventually spread the program to reach all middle school boys in Tahoe and Truckee.

“If we reach one kid and he makes one decision that would have been different than prior to the program, we’ve succeeded,” Reichwald said.Positively Rolling needs 120 skateboard decks. To donate a skateboard, contact Vicki Isakowitz at vicki@cleverminds.org or drop off skateboard decks at Clever Minds, 10090 Church St., Truckee.